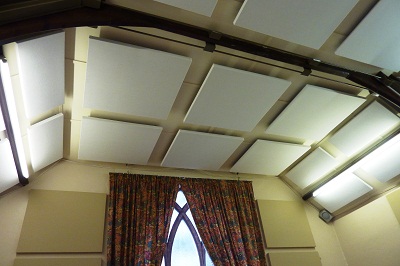 Eden Valley Flix is a community film group established in 2007 that hold regular fortnightly film screenings at Ainstable Church Institute, a church hall built in 1906 in the small village of Ainstable near Carlisle.

Eden Valley Flix uses the hall as a cinema so that local people of all ages do not have to travel long distances to a multiplex cinema to see the latest film releases. It also gives people who reside in the Eden Valley area the opportunity to get together socially as a community.

The problem, however, was that Ainstable Hall suffered from excessive reverberation, a problem not uncommon to buildings of this kind.  The hall was clearly not designed or intended to be used as a cinema when it was built over a hundred years ago.  The poor acoustics meant that when films were being screened within the hall dialogue became unintelligible and ‘garbled’, especially male voices with an American accent.  Feedback from members of the audience highlighted the need for improved acoustics.

Eden Valley Flix decided to involve Sound Reduction Systems Ltd to specify and supply acoustic absorption for the walls and ceiling. The acoustic absorption would solve the reverberation problems and allow the audience to get the most enjoyment from the ‘cinema’ experience.

Over a number of site meetings SRS worked closely with Eden Valley Flix and the Ainstable Church Institute Committee to find a solution that would not only solve the reverberation problem but also be satisfactory in terms of its appearance.

Computer modelling of the hall prior to the acoustic treatment showed that the reverberation time (Tmf) was around 3.4s, far too high for a room used as a cinema.  Based on the expertise of SRS’s technical department it was decided that a target reverberation time of 0.85s would be appropriate and again modelling was carried out to calculate the exact area of Sonata Acoustic Absorbers were required to achieve this.

To solve the reverberation problems at Ainstable Hall, SRS proposed the use of 54.8m2 Sonata Vario Acoustic Absorbers suspended across the ceiling and 7.2m2 Sonata Aurio Acoustic Absorbers fixed at high level on the walls.  This configuration of absorbers was chosen to not only meet the reverberation time targets but to also ensure good, even absorption across all frequencies.

White and Stone coloured Sonata Acoustic absorbers were chosen to be sympathetic to the existing décor within Ainstable Hall.

The Sonata absorbers were installed in one day by SRS’s approved installers, Floorscan Acoustics Ltd, much to the customer’s delight.  The feedback so far has been very positive.

Graham Brown, Chairman of Eden Valley Flix, comments: “Our first film of the season was a great success.  The film really tested our acoustic panels because of fairly quiet voices spoken, often, over loud music. But my ageing ears were able to pick up 99% of the dialogue so I deem them a good buy!”

The project was funded entirely by the National Lottery.